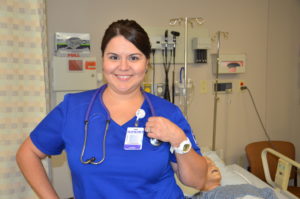 Born in Duncan, Cynthia and her family moved to El Paso, Texas when she was two years old to be closer to her father’s family. While in high school she attended the local vo-tech center and became a Certified Nursing Assistant (CNA). “The job market is very competitive in El Paso so I knew I needed to have a career,” said Cynthia. After graduation she enrolled in El Paso Community College to begin her journey towards becoming a nurse. That is when life brought everything to a halt. Her father had a major heart attack and her brother was diagnosed with testicular cancer. Her brother and his family, who lived in Phoenix, moved to El Paso to begin treatment. Luckily her father recovered from open heart surgery and her 27 year old brother was declared cancer free and moved back to Phoenix.

Life was moving on as were Cynthia’s studies. Then the cancer word was said again as her brother had a brain tumor and was in a coma. Cynthia’s mother moved to Phoenix to take care of him. Putting family first, Cynthia stopped her studies to work fulltime as a CNA and take care of her father. “I would travel to Phoenix most weekends to take care of my niece,” shared Cynthia. “Then come back to El Paso to be there for my father.” The good news is 14 years later; her brother is cured and lives here in Duncan!

It was now time for life to bring her a new adventure by way of an old friend, Hector. “Hector has been a friend of the family for a long time,” smiled Cynthia. “I found a picture of my 6th birthday party and he was in it.” After traveling between El Paso and Duncan, Cynthia and Hector fell in love and were married. Settling in Duncan, their first son, Sebastian, was born in 2008, Isaak in 2009, and Abraham in 2015. “I have worked for Lepien Chiropractic for 10 years,” said Cynthia. “Hector is with Halliburton even after two rounds of layoffs.” Things were hectic but going well.

Life once again intervened. Cynthia’s parents were living in Duncan too when her father was diagnosed with kidney cancer. “This was before I got married and he wanted to walk me down the aisle,” said Cynthia. “He convinced his doctor to perform the surgery to remove his kidney; eight weeks later he walked me down the aisle.”

Unfortunately, Cynthia’s dad put up a strong fight but it was not to be and he passed away in 2012. But before he did he made Cynthia promise that she would go back to nursing school.

Enrolling at Cameron University-Duncan, Cynthia earned her Allied Health degree. With guidance from Cameron counselors and Susan Camp, Director at Cameron University-Duncan, Cynthia was encouraged to apply to the Oklahoma City University’s Kramer School of Nursing – Duncan BSN program. “If this program wasn’t here, I would not have been able to attend nursing school,” said Cynthia. “With three kids, I couldn’t travel out of town.”

Graduating May 2019, Cynthia couldn’t be happier. “The program is challenging, the instructors are caring and knowledgeable and the nurses at DRH couldn’t be more helpful during our clinical rounds,” smiled Cynthia.

Asked what kind of nurse she wants to be, Cynthia responds “a good one”. “I may not have always known I wanted to be a nurse but I knew that I wanted to help people,” said Cynthia. “And after watching all the nurses that took care of my dad and brother, nursing seemed the right path for me.”

Life can be a roller coaster with many ups and downs but it is these that have helped shape Cynthia into the caring person she is today. And in one year, our community is going to be the beneficiary of this impressive young woman.

Be a Dream Maker!

You can help other nursing students achieve their dreams.  Make a tax-deductible donation to the DRH Health Foundation Learning Center Endowment or establish a nursing scholarship endowment.